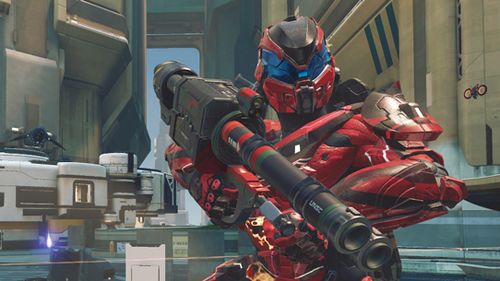 What’s up, Halo-loving humans? Thanks for joining us for another round of Canon Fodder. In case you missed it, last week we gave you a little tease of Halo: Shadow of Intent by Halo story stalwart Joseph Staten. But why stop at the preview, as you can now just go grab the whole shebang and take in the alien goodness for yourself! So far fans love the return to form for everyone’s favorite Sangheili shipmaster, Rtas ‘Vadum, and you can join in the community discussion yourself right here on Halo Waypoint in the novella’s spoileriffic discussion thread. And if you want to increase the scope of your interaction, check out the discourse going on over at the Halo Archive and the HaloStory subreddit as well.

This week we’re going to be tackling some lore-laden details surrounding the latest Halo 5: Guardians update – Cartographer’s Gift. As many a seasoned Halo fan might guess based off the title, this latest update bestows the highly anticipated next evolution of Halo’s Forge mode upon our eager and creative community, and we absolutely can’t wait to see what our awesome and talented fans do with it. Along with Forge, there will be new maps, armors, skins, and weapon and vehicle REQs to collect – including the much sought-after M41 SPNKr rocket launcher (pictured). Around these parts, we know you all are particularly concerned with the backstory built in to such things, and as always, we’re happy to oblige. Let’s take a closer look! 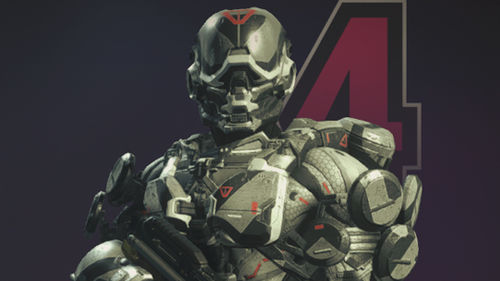 Among the slick new skins for a few already-circulating permutations (LOCUS EDGE FTW - pictured) are a couple of brand new armors added to the mix. These fully upgraded GEN2 Mjolnir sets represent two sides of the combat coin, with one harkening back to the UNSC’s quintessential classic Covvie killers, and the other looking forward with a sleek and sinister shape. Let’s take a look at the story strings for each... 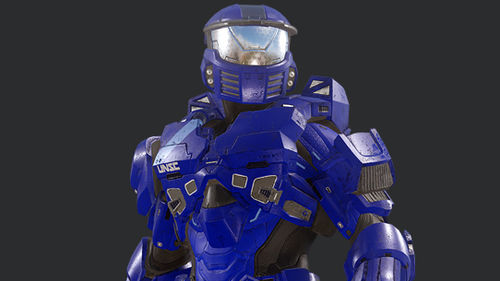 Armor: As the basis for the GEN1 Mjolnir standard, many components of the original Mark IV can be used with GEN2 techsuits and VISRs after firmware updates. This hybrid GEN2/MARK IV [GEN1] suit is still used by select Spartan-II's.

Helmet: A battered Mark IV helmet once worn by the Master Chief is the last thing that SPARTAN-IV candidates see before beginning their grueling evaluation and preliminary augmentation cycle. 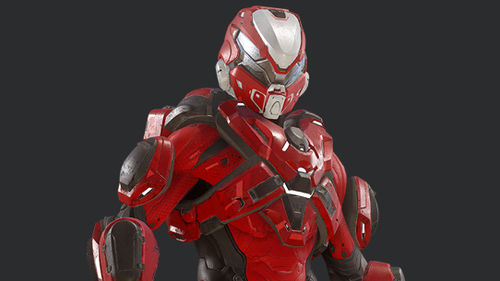 Cartographer’s Gift also includes two new ground-up playspaces for combatants to test their mettle in during Halo 5: Guardians’ Arena and Warzone modes. The simulated locale of both battlegrounds is Andesia, a human colony no stranger to strife and civil unrest, despite its high-class visage.

The relentless advance of the Covenant turned entire planets into funeral pyres between 2525 and 2552. Outer colonies that escaped the attention of the Prophets’ fleets often faced social collapse and mass famine – or worse – after the UNSC retreated, due to their reliance on food and terraforming support from Earth. At best, these colonies lost much of their population and sociopolitical complexity, but stabilized with locally sustainable settlements and technologies. Unfortunately, many cut-off colonies suffered catastrophic failures and were completely wiped out in desperate civil wars, plagues, or rapid reversion of planetary ecologies. As a reminder of what could have been, Infinity’s Andesia-born War Games designers set the training environment of Overgrowth on a Promesa that almost-was: a tomb-city reclaimed by their homeworld’s native vegetation. Here, trainees could prepare themselves for the grim duty of conducting security surveys on dead colonies that had strangled themselves on the complexities of interstellar support and interdependencies during the Covenant War.

The attention paid by the UNSC to the colony of Andesia is no mere coincidence. Almost completely self-sufficient, wealthy, and highly populated, the planet is absolutely vital in the Unified Earth Government’s long-term plans for reunification and redevelopment of its extrasolar colonies. Unfortunately, the planet’s independence movements and off-world Insurrection terrorists only went underground during the Covenant War, and have reemerged stronger and more influential than ever before in its aftermath. While the planet’s corporate and political hierarchy remains loyal, large-scale combined-arms exercises in Warzone environments are absolutely critical in maintaining the UNSC’s killing edge against increasingly well-armed and motivated rebels who threaten the continuance of humanity as an interstellar species. Given the importance of securing Andesia’s critical industries and population centers with minimal collateral damage, it will be the elite Spartans who lead the assault in any hypothetical peacekeeping operation in Noctus and other metroplex areas. 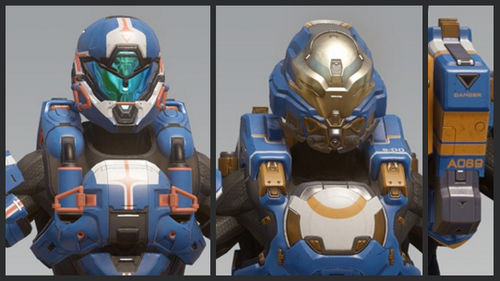 Some keen-eyed fans noticed one of 343 Industries’ talented artists, Kyle Hefley (Senior 3D Artist), recently uploaded some cool production renders of work done for future Halo 5: Guardians armor sets. While we’ll leave the lore bits for another time, we thought we might as well give you a little tease by sneaking you the names of the previewed permutations. On the left you see MARAUDER, and on the right is ATLAS. Also as a fun bit of insider information, on ATLAS you’ll notice a little easter-egg located on one of the thrusters – the tag “A089,” which is actually a clever callback to the internal design designation given to this particular permutation during the development phase for new armors and permutations. It’s not something of in-fiction significance, but it is a cool little peek into the process of how these pieces get from concept to combat. For example, RECLUSE was concept A055, SECURITY was A067, and [REDACTED] is A102. No word on when the UNSC is specifically clearing these particular permutations for field testing, but stay tuned. Also be sure to check out the rest of Kyle’s portfolio as there might just be some other cool Halo art nuggets in there…

When you get your creative paws on Halo 5: Guardians’ new Forge mode in the near future and begin perusing the 1700+ objects at your disposal, you’ll likely notice a couple of particularly peculiar stowaways that are bound to add an entertaining new flavor to your community creations. Meet Timmy and Olive, two new and unexpected gifts from the makers’ minds to your Halo’d hearts. Let’s learn a little more about their enchanting… um… lore. 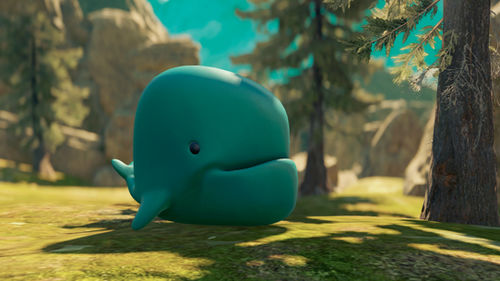 There is perhaps no greater pillar of biological beauty and grace than Timmy the Whale. Revered by the Forerunners and ancient humanity alike, Timmy’s gentle silhouette and soul-searching hue has provided a muse for many, for eons. So important was Timmy’s impact on galactic society that the lifeworkers themselves made sure to archive the enigmatic life force of the gentle giant within the ancient forges, so that his mighty but silent song might once again be felt through a cartographer’s craftsmanship far into the future. 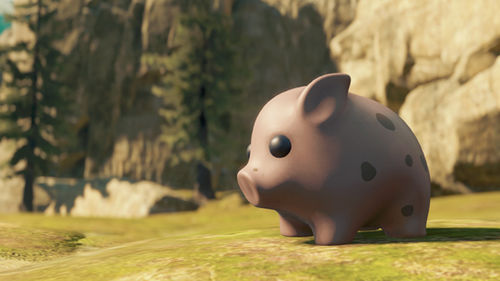 Like Timmy, Olive has a history steeped in myth amongst a multitude of star-faring cultures. Legend has it that by looking into the eyes of the sympathetic swine long enough, one might live a life free of guilt and shame. Stories were passed down by soldiers who told of times, when they hesitated to make a killing blow, saw a vision of Olive appear to finish the job herself, absolving the attacker of regret. The cry of the humble hog – “yoink, yoink” – became a symbolic term of accepting the death-dealer’s role. 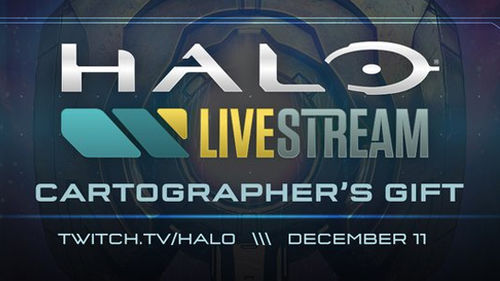 Well, when we deep-dive, we dive deep, ‘eh? And with that, it’s safe to say it’s time to close out. Before we go though, if you’re equally excited about both Halo: Shadow of Intent and the upcoming Cartographer’s Gift update, be sure to tune in today at 3pm PST (December 11th) to Twitch for our latest Halo Live Stream, where we’ll be not only giving fans the first exclusive looks at all the new REQ and Forge goodness, but we’ll also have Joseph Staten himself on as a special guest to talk about his history with Halo, his new book, and more. You won’t want to miss it! And one last order of business, fans of Hunt the Truth will be happy to know that the Season 2 supercut is now available for the download and delight of all. Go grab it and relive the excitement!

Until next week… Live well, play Halo, and all hail the SPNKr’s triumphant, twin-tubed return.

One of many just like it, Munera Platform A7 plays host to an array of War Games simulations conducted by battle-hardened Spartans.

Once a flourishing and vibrant colony world, Alluvion was home to millions of humans before the Covenant arrived in 2542.